Welcome to 31 Days of Homemade Music! Today I’ll be sharing a little of my history. If you want to find more posts in this series, click here.

Before I dive into making a case for homemade music, I think it would be helpful to you to hear my background and how music became such an integral part of my life. Let’s take a trip back in time together, shall we?

Some of my earliest memories as a little girl were that of my sister practicing her double bass (alternatively, the giant fiddle thing). She started playing it the year before I was born, and by the time I was cognizant of her practice and performance, she was already quite good. She practiced it several times a day at home. She skipped classes in high school to go to the music wing to practice it there. Always practicing, practicing, practicing. She played solos and won competitions, and her name was in the newspaper. By the time I was seven years old, she was off to Julliard on a full scholarship. (That’s a big deal, by the way.)

(My sis playing that big ol’ fiddle at our wedding.)

I grew up going to New York City sometimes as frequently as once a month to hear her play. She would have solos in places like Alice Tully and Carnegie Hall. Most parents would assume that a child of my age would have been bored out of her mind at long classical concerts late into the night. But I loved it. The slightly chilly hall, the cushy red velvet fold-down chairs, the purse stuffed under your seat. My mother pre-unwrapping cough drops so she wouldn’t have to make a noise during the concert and get kicked out. The smooth stage floor, the deep and varied woods of the string instruments. The shining brass section, the percussion instruments set up like a tinker’s workshop, the woodwinds sleek and long, and always my sister on the far right in a line of double bassists, all sawing away with their big bows, arms snaking up and down the neck with remarkable dexterity. It all brings back the type of familiarity that most people get when visiting a relative’s house.

And what a thrill it was to hear the oboist play an A and hear the orchestra join in a chorus of night sounds as they tuned. Or to watch the principal violinist or conductor march confidently onto the stage to thunderous applause. There was always the moment of anticipation as they dimmed the lights. And, oh, the music- when it started, it was magical. I imagined. I wrote stories in my head as I listened. Adventure stories, love stories, stories of heartache and war and restoration. I’d watch the bows move in unison as I dreamed on for hours at a time. I’d pick out my sister- I’d watch in amazement to see that the soloists had no music- then I’d go back to floating through my reverie.

I didn’t really know at the time what a rare privilege it was to be able to attend so many concerts of such high caliber at such a young age. I met some amazing music professors and top-notch performers, but to me, they were just neat people that my big sister hung out with. I was a little girl- and little girls have no context for important people. I once told a revered bass teacher that if he wasn’t careful my hamster would poop on his head. But that’s besides the point.

When I was nine, I started the violin in the middle school orchestra. (My sister said I should play the bass, but I wanted to do something different.) I really liked playing it, and it was probably because of my sister that I kept up doing it. Regretfully, I never took private lessons and I rarely practiced at home. Nevertheless, I did learn how to read music, how to develop my skills when something was challenging, and developed a love for music that I may not have had exposure to otherwise.

Lest you think I was completely a classical music dork, never fear- I too was consumed with pop star phenomenons of the late nineties, hard rock, punk rock, and scream-o, emo bands, indie recordings, bad Christian radio singers, and various other teenage fan phases. The point is that music was continually a safe place for me as I grew- a refuge, an outlet, a rapture.

By the time I was in high school, I realized that I liked to sing a lot, and had a decently pretty  voice for my age (though mousey and unsupported). By the time my junior year rolled around, I had extra elective slots and I joined chorus with a couple of my friends.

And what a world it opened up! I fell in love with it all- with warming up, trying to sight read the my part, learning singing techniques and different languages and singing in a group. There was something enthralling about working together with so many other people to create something beautiful. I started taking voice lessons that summer. In my senior year, I auditioned for a small, more advanced ensemble and got in. I got solos in the school concerts and attended district and regional competitions and placed fairly well overall. I loved, loved, loved singing. I had never thought about what I would do after high school before, but suddenly it became clear- I wanted to keep singing and study music.

I went to a small Christian college and enrolled in the sacred music program. While the school itself was far from perfect, there were several really great music professors with a genuine passion for what they did. Arriving there made me realize I was a big fish in a small pond in my high school, and that I had a good bit of work to do to develop my voice. I went through my undergraduate and went back for my masters in education.  By the time I was done, I was another big fish in a different (smaller) pond with her K-12 music teacher certification.

Somewhere in the middle of all that I married a really good looking guy who was an excellent guitarist, songwriter, and euphonium player. He’s also one of those sick people who can pick up an instrument he hasn’t learned and figure out how to make it sound decent within a short period of time. During our dating years, we frequently sang together. We had songs that were codes for what we really meant to say. We did a music apprenticeship together at a church for a year. Tim’s guitar came with us everywhere, and my mom-in-law used to joke that it would soon be sitting in the front seat instead of me if I wasn’t careful. Music was an integral part of our relationship. 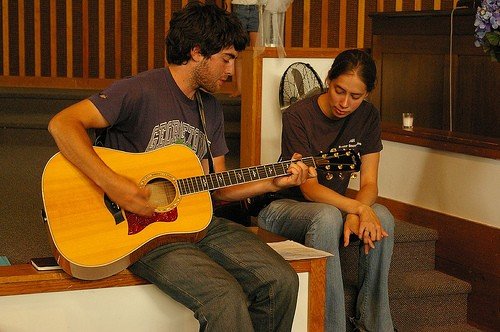 After graduating, I had my own classroom for a year. I hated it. (Not all of it, really, just the stress of managing little people with a lot of energy and instruments in their hands.) I decided to stick only with private voice lessons. Now I’ve been teaching privately for almost six years and still very much enjoy it.

After college and having my son, I began singing with local groups and realized (again) how much I could still develop as a vocalist and performer. I began taking more private voice lessons on a more professional level and I found that there is always more to learn, always more to develop, and always new challenges to overcome. Singing is a constant lesson in discipline and humility for me- lessons that I desperately need.

To this day, my husband and I sing together at home, in church, at weddings, and in a little folksy band with friends. We still have to practice regularly. (That never changes.) We are always listening to music with our little ones, and J likes to put on evening “music shows” with his play instruments. 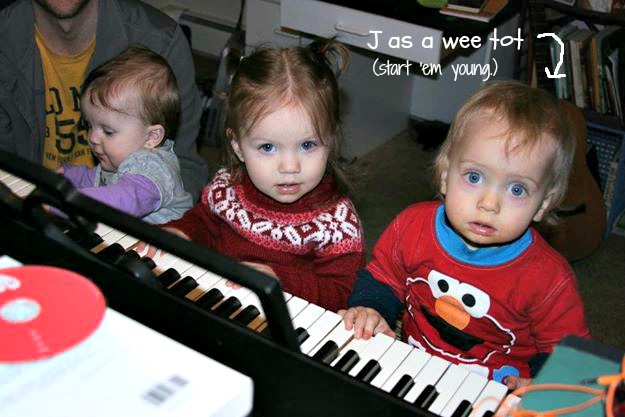 So you see, music has stayed with us throughout our lives in a fully permeating way. It has a soulishness about it that can weep with the sorrowing and rejoice with those who laugh. It has been over the years a communicator of our passions, a release for our pain, and a shelter from the busy world. Music has charms to soothe the savage breast, they say, and it really does. I may or may not ever be a notable performer, but music has a strong hold on me that cannot easily be released. It has been around for me since I was in the womb, and I will probably take it to the grave.

What good has it done me, if any, to be so immersed in this discipline for my entire life? Come back tomorrow to read about how the arts are the only subjects that educate the soul. 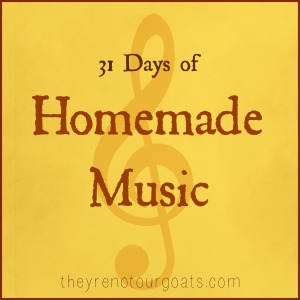 Beneath the Sun (Saturday Song)

Thank you for sharing!

2 thoughts on “My Music Story (Day 2 of Homemade Music)” 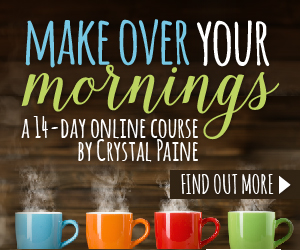